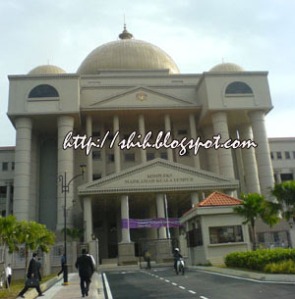 Let me trace out the problems which have plagued the new Jalan Duta Court.

1 May’07: Three ceiling panels collapsed in the secretary’s room of Civil High Court 6.

4 May ’07: Cracks on the walls measuring more than 3m appeared in the corridors near the Magistrate Court 4.

8 May ’07: Due to a faulty air-con, a High Court judge was forced to postpone the hearing of a case.

9 May ’07: Everyone was left in the dark as the entire court complex was plunged into darkness due to a powercut.

23 May ’07: The Court started to drown under the weight of its problems as a water pipe bursts and floods the cafeteria found in the basement level of the court complex.

25 May ’07: The sum of all these problems really raised a stink as sewer overflowed out of a manhole due to a blockage. Court files which were placed directly over the manhole were damaged.

26 May ’07: A possible reason to this catalogue of problems? The Court complex does not have a Certificate of Fitness.

26 May ’07: We also find out that the shuttle van service ferrying court staff, lawyers and members of the public to the Court complex did not have a permit to operate such a service.

I anticipate that I will be updating this list quite regularly.

Updated
5 June ’07: An explosion rocked the basement of the Court complex, as a CO2 valve was believed to have given way. It was reported that court staff were told to hush up the incident.

One thought on “A Chronology of Calamitous Events at the Court”